Thanks to the consolidated experience gained in 60 years, Visa SpA offers solutions dedicated to the different business sectors. Specifically, the company based in Fontanelle is able to offer specific projects for the requirements of the port and airport sector. Such as the equipment recently supplied to the Marco Polo airport in Venice, a system designed to supply the service plants to ensure a continuous and reliable supply of electricity.

The project involves a reliable electricity supply system in emergency mode for the installations designed for take-off and landing runways. Given the critical nature of the application, machines have been designed and developed to ensure maximum safety.

Considering the type of application and the specific requirements of the site, we have designed a machine redundancy system and a dedicated filtering system, due to the problems that could arise as a result of the quality of the diesel in systems used in emergency service mode.
Among the required technical specifications there was the need to power the load within a maximum of 15 seconds from the power failure.
The plant was also equipped with a 500 kW resistive bank for the recurrent load test.

The two generating sets are equipped with an In-Sync automatic control panel which is normally used for the parallel management of the machines. In this specific project it was designed to use the logical resources of the control unit for a better interface with the customer’s BMS (Building Management System). The detection of the mains and the management of mains/generating set exchange times are managed by the changeover switch in the control panel of the customer’s plant.

The two generating sets do not work in parallel with each other but are used in redundancy mode on each other. In the event of a power failure, the customer’s BMS sends a start-up signal to both machines. The two generating sets start up simultaneously and the first one that reaches the nominal voltage and frequency conditions, closes its motorised switch to power the load. The second generating set still stays running for a few seconds and then stops. This ensures compliance with the specification that requires the load to be powered within max 15 seconds from the power failure. 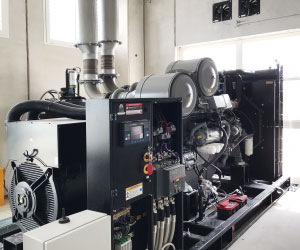 The machines have also been equipped with a remote control system via GSM that allows the customer to monitor in real time the main parameters and alarms, identifying any anomalies and planning a timely intervention if needed, allowing to start or stop the machine as if the operator were physically present in front of the panel. The system also displays the graphic trends to verify the temporal trend of the main parameters, as well as periodic reports of the most important statistical data

The two machines are in an open version, both equipped with a separate 120 Lt daily tank with a retention basin and leakage float, fitted with a diesel loading system and dialysis system. According to the customer’s specific requirements, the tank was mounted on a stand.
An additional separate 15,000 litre tank, underground and double-walled, complete with diesel connections, refuels the 2 daily tanks of the generating sets, each powered by its own automatic diesel loading system (Fuel Tutor). 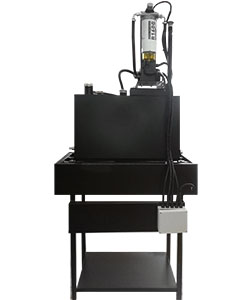 The 2 daily tanks have been fitted with a localised dialysis system, controlled directly by the machine’s control unit. With regard to the separate 15,000 Lt tank, a specific filtering kit has been installed, controlled by an independent PLC for alarm management and for programming the frequency and duration of the filtering operations.

Once a day, for a period of about 30 minutes, an automatic test is activated which has the specific function of avoiding the formation of any algae or impurities in the diesel. This is a characteristic that occurs on the engines of generating sets in the Stand-by version, which remain stationary for most of the time. While on the one hand the stationary engine preserves some of its mechanical characteristics, on the other it raises some problems linked to the quality of the diesel, which has in fact changed in recent years, with the introduction of Biodiesel 4-10% (or more) and with the reduction of sulphur. Biodiesel above a certain percentage and at low temperatures releases impurities while at mild temperatures, when mixed with water (condensation), it causes the proliferation of bacteria and algae. These factors clog the engine filters and block the injection pumps.

Other features of the plant: 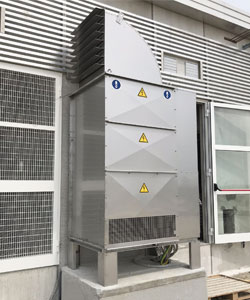 In order to always keep the machines in perfect condition and to periodically check that they are working properly, a 500 kW load bank was supplied with two load steps of 250 kW each. During the recurrent operation test conducted on the generating sets, the operator starts the machine by means of a selector located on the control panel and the generating set sends the closing command to the switch that powers the load bank.

In the event of a power failure during the test, as soon as the generating set receives the start signal from the BMS, the resistive bank is released immediately, allowing the machine to remain available for the load to be supported.

The generating sets have been housed in specific separate rooms, prepared by the customer with all the appropriate features that allow it to work properly.